Mary Forde, on behalf of the service, thanked the Lions Club for their generous donation and expressed her gratitude for its support over many years. 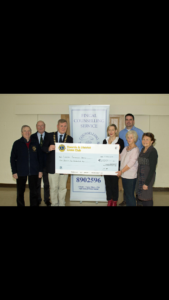 In response to current Covid-19 situation, the management of Fingal Counselling Service have delayed the reopening of our service until 18th Jan 2021. This decision is being taken for the safety of the clients, counsellors Read more…

BASE celebrated their 30th anniversary on Friday 19th May with a party in BASE resource centre, Swords. A wonderful night was had by all. Congratulations to all those involved in the celebrations. Pictured below are Read more…

The Mental Health and Wellbeing Fare took place in the offices of Fingal County Council Swords on Saturday 22nd April 2017. Fingal Counselling Service was represented by Helen Hughes and Denise McDermott. There were a Read more…